Great to see Rich back on the Blog. I feel like I have completely monopolised it since Ross was born, but it was set-up to record our journey from deciding to climb Mont Blanc up until when we actually do it, and what’s happened over the past few months is now completely intertwined with that. As Rich mentioned the coming months will be tough, especially for Rich and Kirsty with the 10th anniversary of Archie’s death. Christmas will be very different for us this year; I think we’ll be comparing it to what it could have been, but at the same time we know we have to make the most of it.

We had another consultation with the doctors in Necker Children’s Hospital yesterday. For some reason it seemed to be more positive than the previous ones, but I think that was more to do with having a different, more enthusiastic and optimistic doctor, rather than due to any breakthrough with understanding Ross’s condition, as overall Ross’s condition in much the same as it has been for the past few months. I must admit though, despite the fact my French is pretty good now, I really struggled to understand a lot of things the doctor was saying – I think it’s just that I don’t have the energy available…

The doctor was very pleased to see that Ross has now been seizure free since he started the steroids back at the beginning of July. The team there honestly were not expecting them to control the seizures at all. Anyway, they are controlling them for now and we are extremely thankful for that. Last week’s EEG results show that his brain activity is still completely erratic, although again we are pleased to see that it has not gotten any worse. 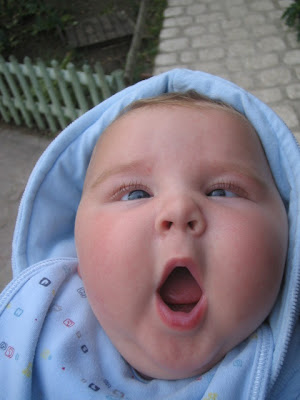 We still don’t think Ross can see anything (although we need to see a specialist opthalmist for confirmation), but we do find that sometimes we can soothe him now so hopefully that means he is aware of us on some level. But he is having a terrible time with lots of wind after his bottles and constipation due to the cocktail of drugs he has to have (cue even more drugs to counteract the effects of other drugs!!!). This results in him being very agitated a lot of the time he is awake and us getting not a lot of sleep. I know all babies wake at night a lot of the time, but there’s normally an end in sight…

So all in all, still very tough, tiring and frustrating. Fin is our little angel though and is keeping us going.

Quick update on the training; I have been for 2 runs in the past fortnight, including one where I got lost in a hilly forest in the Black Forest during a work trip. Definitely not enough to get me fit enough to climb Mont Blanc, but there’s plenty of time, isn’t there? Plus there’s the Wii… I see Rich think’s he’s Rocky; maybe we’ll get the gloves on some night and see who’s left standing. Charity boxing anyone?

By the way, assuming you’re starting to think about Christmas already, why not buy your Christmas cards and help a great cause at the same time by clicking on this link NSE Christmas Cards.

And finally, many of you will know that I’m a bit of a rugby fan, and as such I was touched by the story of Daniel James, especially when I read Brian Moore’s article which he wrote for the Telegraph; to read the article, and come to your own conclusions on it, click on this link Telegraph.
Posted by Karl Donnan at 06:22