We've just had a great weekend with Richard and his family staying with us for a few days.

Their twin boys are the same age as Fin, and their older son and daughter kept Fin entertained in the garden for the whole weekend. Ross got lots of attention from Richard's wife and did his usual 'I'll pretend I'm no bother' behaviour when we have people to stay. He was full of smiles and only cried when he got his medecine. He even slept pretty well! I reckon he does it so everyone thinks we're nuts when he say he cries loads or doesn't sleep...

Did a 5 mile run with Rich on Saturday to compare our fitness levels - it's strange how even though we're the same height his legs seem so much longer and therefore faster than mine. We then proceeded to undo any fitness gained by having a very long lunch in the sunshine in the garden all afternoon.

We also collected the keys to our new house at the weekend and went there for a picnic in the garden on Sunday. We're planning on moving during the week after Easter; it'll be good to get into our own place at last.

Ross has had visits from the speech and language therapist and has been seeing other therapists each Wednesday morning. Last week he giggled when presented with a little vibrating toy, and we've noticed he's started moving his head in order to follow lights with his eyes. All little positive signs which mean so much.

We're off to Scotland for Easter in a few days - hope you al have a great Easter break.

I'll leave you with this image taken on the final ridge to the summit of Mont Blanc - we're hoping for weather like that... 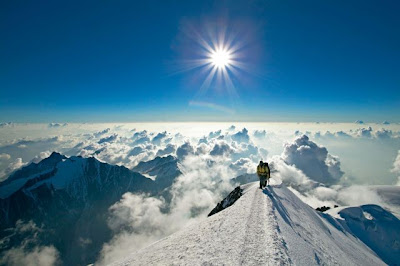